What’s In A Flag?

I’ll let you in on a little secret: I have a confederate flag tucked away in my closet. It’s been hiding in there for the last forty-two years. Why? Why would I harbor that symbol of southern stubbornness and inbred racism, especially in light of the latest atrocity in South Carolina? Why not burn it now? I have to admit, I have a sentimental attraction to flags.

According to my mother, it goes back a few centuries. The name Ross appears in the family archives, and one of my great uncles was named Ross. That connection includes Betsy Ross, the seamstress who allegedly patched together the original stars and stripes for General Washington. Another name that appears in the family tree is Davis, and I’m told that a guy whose first name was Jefferson was one of the more prominent members of that branch of the tree. Uncle Jeff was also associated with a flag, although historians tell us it was never the official flag of the Confederate States of America.

Moving ahead to the 20th Century, a young Bob Crabb set out for Atlanta, Georgia, with his buddies Doc Halstead and Charlie Williams. Doc and Charlie were musicians and I wrote words to their melodies. We put together a band called Carrie Nation in Nevada City in 1971, but were unable to find enough willing musicians to starve with us while we tried to climb the ladder of success. Charlie had an uncle, a trappist monk no less, who had left the solitary life of the monastery in Conyers to found a halfway house for runaway youth in Atlanta. He had a place for us to stay while we mined the rich inventory of musicians in the big city.

So it was that we left the nest in April of ’72 and began the process of acclimating to the alien southern culture. It was not easy for us foreigners, with our west coast yankee accents and liberal ways. But I was surprised also by how much the old Confederacy had changed in the eight short years since the Civil Rights Act and desegregation, at least in the big city of Atlanta. Jimmy Carter was Governor, and there wasn’t a burning cross in sight. People of both races seemed to get along, although the “N” word was still spoken and the stars and bars flew over the capitol. We’d see famous racist ex-gov. Lester Maddox hawking autographed ax handles like the one he used to chase the coloreds out of his restaurant a mere eight years earlier. Even so, it seemed like racism was dying on the kudzu vine, and would be buried along with the old generation.

As time went on, we found new musicians and began to flesh out the hybrid west coast-southern sound we’d been looking for. It was a new Carrie Nation, and it seemed we needed a symbol to highlight the change. We had brought a California Bear Flag with us, and one day I was inspired to cut out the bear and have Charlie’s wife Sue stitch onto the middle of the stars and bars. It was a perfect fit. 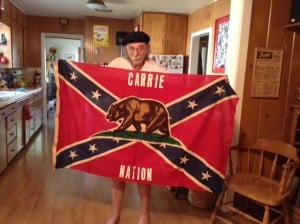 The Carrie Nation Flag appeared on stage with the band from then until their final show in the summer of ’77. No one ever complained, but it was a different time. When the band broke up, the tattered banner was folded up and forgotten, until this week.

Now the controversy is alive and viral, thanks to the dimwitted kid who still believes in the myth of racial superiority and the peculiar institution. The old wound in the American psyche bleeds again. There are calls to turn the flagpole into a burning stake, to cauterize the wound once and for all.

It’s a tough call, because this old flag has sentimental value to me. My reason for using the flag had more to do with geography than ideology.  I know it is as offensive to blacks as the swastika is to Jews, and it doesn’t help that I have relatives who championed the lost cause. And truth be told, there are Mexicans who feel the same way about the bear flag and the theft of California’s riches by the forty-niners. (Hmm…Is it time for a new name for the football team? Is the gold miner symbol on the Nevada County logo a racist statement?) We all have our cross to bear.

So I’m not going to torch my flag. I’ll fold it up and put it back in the closet with all the other ghosts of the past. Maybe it will end up in a museum some day, where it can tell a different story and perhaps redeem a small piece of its evil legacy. One can hope.