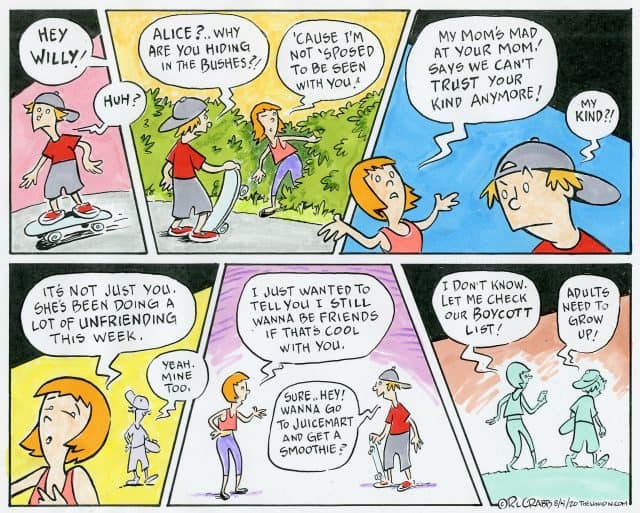 Last week there was a frenzy of unfriending on Facebook as the gulf between left and right widens to the point where one side can no longer hear what the other side is saying. Most of these people are only friends in the loosest sense of the word anyway. They are just people seeking out kindred spirits, potential mates or allies in a cause, or to see what the opposition is thinking.

I’ve resisted the trend, although I can barely stomach the hate I see coming from both ends. Accusations of treachery and treason are hurled back and forth with wild-eyed abandon. Even little old ladies have become bloodthirsty harpies, vowing to send the enemies of the republic to the executioner’s axe without blinking an eye.

I’m still looking for the good guys in all this chaos. Is it the Trumpublickins, who back their leader’s scheme to sabotage the post office in a last ditch attempt to foil voting by mail and hold on to power? Whose remedy for unrest is faceless jackbooted thugs and savage beatings? Are they the party that can’t seem to come up with another stimulus bailout as millions are about to be evicted and cut off from unemployment?

Or is the woke Marxist-inspired revolutionaries who plan to remake the nation in a spending spree that will bury future generations under a mountain of debt and inflation? New cultural corrections will rewrite history without mercy for the founding fathers and their progeny, whose addiction to slavery and racism made the words “all men are created equal” ring hollow for two centuries.

The moderates will say they can keep it under control with Uncle Joe at the helm, but I wonder if they even believe it themselves. The Democrats are counting on the excesses of Trump and his cronies to sweep them into power. Once there, they can fiddle with the constitution to keep themselves from being outed again by the hated electoral college.

Or maybe not. If voters follow the historical trend, the Dems will only have two years to navigate the maze of constitutional amendments required to achieve their goal, and by then they may have alienated enough taxpayers to get booted again. Schizophrenia on steroids.

And that all depends on whether the nation can keep from descending into civil war. Let’s hope the kids in my cartoon can rise above their parents’ stupidity and right the ship of state before we emulate the examples of Rome, France, Russia and countless banana republics.

And that all depends on whether those kids even have a clue where those nations are on a map.

As Bette Davis might have said, “Hang on. It’s going to be a bumpy decade.”

7 Responses to A Friend Indeed