Okay, let’s clear up this Covid-19 business, using the Alien movies in comparison.

In the first movie, crew members attempt to drag the contaminated guy back into the ship, but Ripley refuses to open the airlock. Unfortunately, a unscrupulous doctor (who turns out to be a corporate robot) overrides her command and he opens the door.

Result: Only Ripley and Jones the cat survive. Everyone else dies horribly.

In the sequel, Aliens, the Colonial Marines and Ripley are sent in to clean up an infected colony, but the Marines treat the job like a joke and believe their big guns can handle any “bugs”.

In Alien III, Ripley wakes up on a prison planet. (Hicks and Newt are victims of faulty suspended belief pods, so as not to complicate the plot.) She brings the Alien with her, who makes mincemeat out of the captive prison inmates.

Result: Even Ripley dies, sacrificing herself  to foil a military scheme to use the alien as a weapon.

But in Alien IV, Ripley comes back as Typhoid Ripley, a clone fused with Alien DNA, in a laboratory aboard a government space ship. Cloned aliens escape and carnage ensues.

Result: Ripley and Wynona Rider Robot survive and get back to Earth.

(We’ll skip the stupid Alien v. Predator movies and move on to the prequels.)

Now in Alien Prometheus, supposedly wise aliens known as the Engineers play god and create life on Earth, but come to regret their decision as far as humans are concerned. This is discovered by the crew of the Prometheus as they explore a wet market on a desolate planet, where the Engineers have been wiped out by their predatory experiment.

Even so, a pair of idiot crew members find an alien and for some inexplicable reason decide to taunt it. The little alien makes short work of them.

Then a robot decides to infect another crew member with a viral cocktail, just for kicks. The crew member has sex with his girlfriend, spreading the infection, before going on a murder spree and getting cooked with a flamethrower.

The girlfriend realizes she’s carrying an alien, and finds a pro-choice computer program to help her abort the thing through a quickie c-section, but the little guy survives.

Meanwhile, the rest of the expedition discovers a surviving Engineer, forgetting that they were there to wipe out humanity.

Result: Everyone must die so the alien contaminant can’t get back to Earth. Girlfriend survives, but foolishly takes the traitorous robot off on a trip to find the Engineer homeworld.

Which brings us to Alien Covenant, where a ship full of colonists headed to a new planet get sidetracked and end up on the Engineer homeworld. Amazingly, the first thing they do is hike off into the woods without any protective clothing or breathing apparatus, even though they have no idea what kind of lifeforms and diseases exist on this planet. (Who recruits these people?)

Of course, alien spores immediately get into their orifices and the cycle of dumb begins again. The bad robot appears. He’s killed the girlfriend from Prometheus, using her as a host for his experiments, and wiped out the entire Engineer race for good measure. Colonists die.

Result: The bad robot tricks the survivors into carrying the alien seed off to the colony planet.

Moral: Shelter at home on Earth. And send the robots to the junkyard. They only want our jobs. 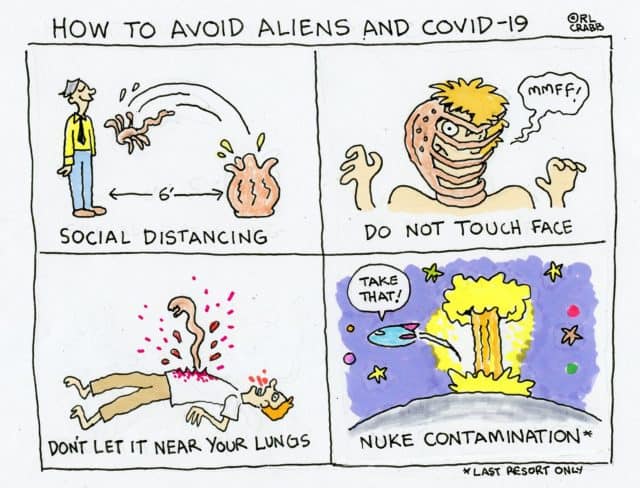