Yesterday I made a trip to the outer world. I didn’t really want to, but there are some things that need to be done and I’m the only body available to do it. It’s a risky business for an old guy like me. I’m almost seventy and I already have medical conditions that mark me as a ripe target for Covid-19.

So it irks me to go into a business and see so many people who don’t feel the need to cover their face. Not just the neanderthals, but younger humans who look like they might have an ounce of responsibility rattling around in their head.

I was even more perturbed when I read an account of a female Facebook friend who was harassed by a group of thugs at a gas station in Penn Valley, just for asking them to keep their distance. I mean, what the actual fuck?

Wearing protection and keeping your distance is not that big a deal, folks. You can make a mask at home, and it’s not too difficult to stand a few feet away in most public places. Most businesses have measured and marked the areas to help those who are depth perception challenged.

So anyhow, I’d just like to show that I can be just as much of an asshole as the next guy or gal. If you are sensitive about seeing an exposed asshole, stop here. Otherwise, read on… 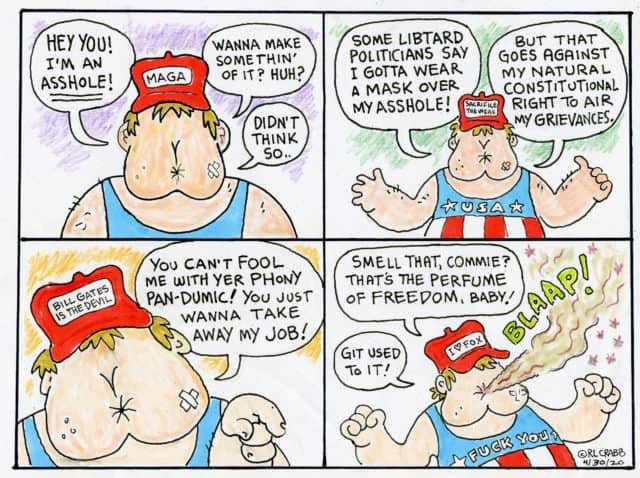 9 Responses to Just Another A**hole