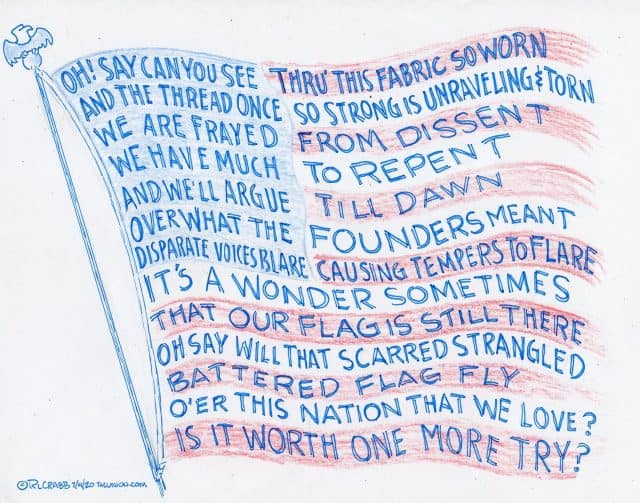 I’m feeling patriotic this 4th of July, more so than usual. 2020 has been brutal to the American psyche. The divisions have always been there through history, but the toxic stew of politics and pandemic stirred by a highly partisan press and a contentious president has brought the nation to a boiling point. We either turn down the flames or go up in them.

Both the left and the right have become obsessed with America’s legacy. The right wants to return to the dreamy days of Ozzie and Harriet, where the LGBTQetc. were closeted and abortions were consigned to dark alleys. Where minorities were only acceptable if they knew their place. Where manufacturing jobs were the staple of our economy, as long as they could keep the unions from driving up prices. Where we could merely rattle a sabre to keep the rest of the world in line.

And the left is intent on tearing down everything they hate about America. Every statue of any historical figure related to slavery, racism and capitalism is fair game. Anyone who deviates from the new morality or defends an unpopular opinion is labeled a misogynist, bigot and/or racist. And as Mick Jagger sang so long ago in Sympathy For The Devil, “every cop is a criminal and all the sinners saints.”

If Donald Trump has any hope of being reelected, it’s because Americans are not quite ready to take a cultural guillotine to George Washington and Abe Lincoln. You can already see it in the campaign ads and Trump’s rhetoric.

I’ve been hoping that some “silent majority” would rise up and squash this bipartisan bullshit, but my imagined middle is missing in action. Oh, both sides claim they are the middle, but give them an inch and they’ll go for the jugular. It’s come down to all or nothing, or if that can’t be accomplished, secession. And given that today’s divide has more to do with rural versus urban than north versus south, dividing up real estate would be very problematic.

Being the eternal naive optimist, I’d like to think that there is still time to right the ship of state before it breaks up and sinks into the abyss, leaving a power vacuum to the likes of the Russian oligarchs and  the communist Chinese.

Not to forgive the sins of the past, but to learn from them. If you really look at our history, that is the true promise of America. The flawed founders wrote a constitution that allowed us to change with the times, and over two centuries we’ve worked at  addressing the rights of those left out of the original charter. It’s just been too damn slow getting there.

So I salute the old flag, not for the past injustices done in its name, but for the possibility of the free and united nation it still could be. Our independence relies on our interdependence. Never a perfect union, but closer to it.