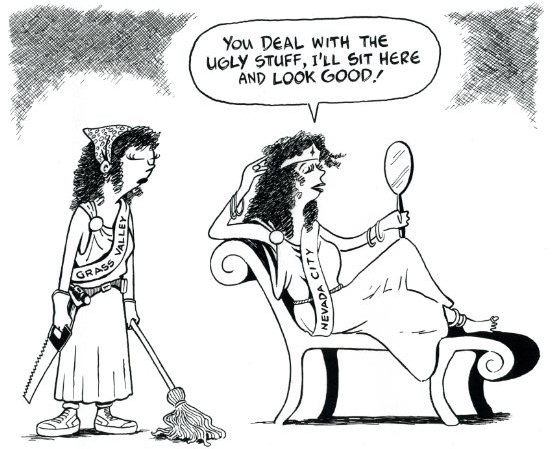 In a recent post on Jeff Pelline’s blog, he admonishes the city of Grass Valley for not having the foresight to enact a new ordinance designating the original township as an historical district. Jeff always likes to point out that GV is run by “the good ol’ boys” and their developer friends who see any kind of regulation as a plot to beat their hammers into plowshares and make them grow organic carrots and medical marijuana.

Many residents of the Queen Mothership Nevada City share these views, despite the fact that The Cutest Little Town of the Northern Mines would never survive if it wasn’t for the services provided by the ugly stepchild town down the hill. Downtown Nevada City has no drug store, no grocery store and only one gas station within walking distance. The Bank of America sits empty, next to the  Alpha Building, which holds the record as having the largest square footage of any billboard in the county. If you walk by, you can find out what’s going on everywhere but there.

But that never stops them from complaining about our ugly shopping centers and lack of “progressive” leadership. They bemoan the idea of a big box store, while millions of dollars go to Auburn and Roseville. Don’t these pawns of the corporate hegemony know the “shop local” mantra?

Well, yes, we neanderthals do understand it, but that doesn’t mean we can afford it. There are many people living close to the edge of poverty who would love to buy a five dollar heirloom tomato at the farmer’s market, but it’s not in the budget. It’s one thing to complain about buying shoddy products made in China, but quite another when you add up the cost of a pair of pants produced by an All-American-living-wage-and-benefits worker.

The obvious question here is; does Grass Valley need an ordinance? Is there a problem? ( I’m not aware of any plan to bulldoze any historic structure, but I’m all ears if there is. ) Could it be that this is regulation in search of a purpose? Something to raise the property value of one section of town and add a few dollars and inspectors to the planning process? If so, maybe this is an idea that could wait until the economy is on a little better footing. It’s not like GV doesn’t have any rules.

Nobody’s perfect, and the reigning honchos of Grass Valley have run into the same headwinds that has municipalities all over the state teetering on the edge of bankruptcy. At least they’re not asking for sales tax increase to cover their ass.