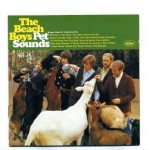 There’s a lot of buzz in the music industry about this summer’s Beach Boys reunion tour featuring all the surviving members, most notably, Brian Wilson. The word genius gets tossed around quite a bit in rock’n’roll circles, but in Brian’s case it’s well earned. Even though the band started out by borrowing Four Freshman vocal arrangements and Chuck Berry guitar riffs, it didn’t take long for Brian to stand out as a songwriter and producer. In the beginning, they capitalized on the California dream of sunshine, surfing and hot rods, but you could already see that Wilson was moving past the fads with songs like In my room and When I grow up to be a man.

When the Beatles came along, everything changed. Most of the band members wanted to stick with the formula, but Brian was ready to match anything that Lennon and McCartney created. The result was the album Pet Sounds, released in 1966. The closest thing to surf music was a rearrangement of the folk song, Sloop John B. The rest of the album was a musical photograph of the inside of Brian’s mind. From the haunting  Dont talk (put your head on my shoulder) to the remorse of I just wasn’t made for these times, Brian gave us glimpses of the inner conflicts that would eventually cripple him.

In my opinion, it is the closest thing to a perfect pop music album ever recorded. To this day I can’t listen to it without marveling at the depth and fullness of those songs, produced by a guy who was deaf in one ear. It still makes me smile.

And Smile was Brian’s downfall. Brian was already eons past Pet Sounds and ready to challenge Sgt. Pepper as the defining album of the sixties. The unreleased album (until 2004) has become the stuff of legend, even inspiring the movie Eddie and the Cruisers.

I have been fortunate enough to see the band three times. The first time was 1965 at the Memorial Auditorium in Sacramento. (Sac was the Boys’ favorite audience. The year before they recorded their first live album there.) It was the only time I got to see Brian, who quit touring with the band because of his hearing problems.

The second time was by far the best. In 1971, I was visiting friends in Forest Hills, New York, and found out the band was playing at Carnegie Hall. I took the double-A train downtown and bought a ticket from a scalper. The band was out promoting their new album Surf’s Up, and Brian had been replaced by Blondie Chaplin. (Blondie once appeared at the Nevada Theatre with rock legends Paul Butterfield and Rick Danko of The Band, but that’s another story.) It was a wonderful performance, and the band played mostly new material. But it was telling that even at the prestigious Carnegie, the stuff that got the biggest applause were the old surfing standards.

When I saw them again in 1974, they had totally reverted to the old Beach Boys, right down to the matching striped shirts. I like the old songs, but it was sad to see them become a nostalgia act.

Since then, Brian has made a comeback from years of drug use and mental illness. After all his highly publicized problems, it’s amazing that he is only surviving Wilson brother. (Dennis drowned and Carl died of lung cancer.) I doubt that I’ll make it to see them this time around, but it’s nice to know they are still out there making music. It’s the great thing about America, there are always second acts, and sometimes a third or fourth, if you can live long enough.

9 Responses to The Perfect Album