Inept vs. Insane: The National Feud 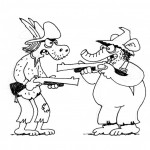 . After years of Hitler documentaries and speculative programs connecting space aliens to the Big Foot phenomenon, History and Discovery have spawned a new awakening of rural culture in America. Whether it’s huntin’ gators in the Cajun swamps of Louisiana or gold mining in the wilds of Alaska, audiences just can’t get enough sleeveless no-collar jobs and hobbies. With Costner’s effort, History has upped the ante and joined the networks with an original history-based mini-series on the most famous regional disagreement since the Civil War.

I was struck by the dumbness of it all. Watching the argument escalate from a stolen pig to a conflict that wiped out entire families was facinating, if somewhat grisly. Even the marriage of a Hatfield to a McCoy was dumbness squared. I found myself yelling at the TV…”Don’t tell your wife where your cousin is hiding and that he has a $100 bounty on his head!!!” Sure enough, she runs to her family and a hunting party is organized. Not exactly as romantic as Romeo and Juliet.

Most distressing were those moments where the families try to defuse the situation, only to be rebuffed with buckshot or a knife in the gonads. Pride and principle are too important to bother with reason. The moonshine doesn’t help.

Of course, the parallels to the ongoing disagreements between conservatives and progressives were obvious. The presidential sweepstakes have gone into second gear now that Clem Romney has emerged as the GOP’s top dog.  Fox and MSNBC are doing their part to stir the mash. The lies, distortions and vitriol from both camps has gone viral, even as the lawyers caution the parties to keep their powder dry until the big showdown come harvest time.

However the election turns out, the losing party will no doubt be unwilling to cede power to the victor. Pride and principle are at stake. Keep your powder dry and please, if you’re going to drink moonshine, get a designated driver.

55 Responses to Inept vs. Insane: The National Feud