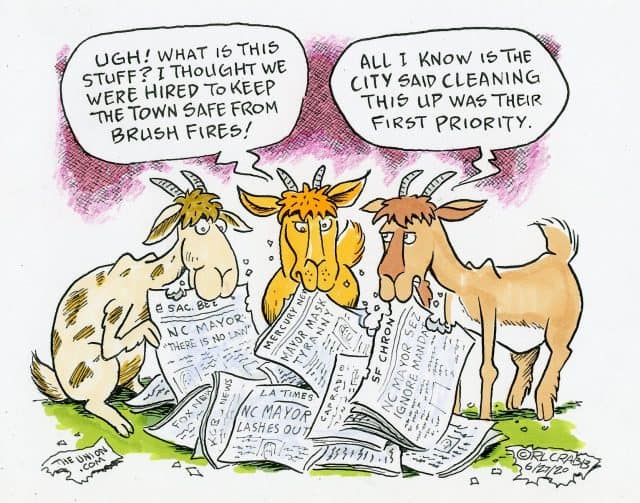 Over two separate terms on the Nevada City City Council, Reinette Senum has managed to garner national (and even international) headlines for her controversial opinions, ranging from killer cops to her present stand on the legality of wearing masks. Despite the negative press coverage for the city, her supporters either agree with her or choose to look the other way and focus her accomplishments promoting the farmer’s market, pedestrian upgrades on Commercial St. and the “Goatfundme” campaign to defoliate fire prone areas surrounding the city.

But this time she may have alienated too many residents. Vacation rental facilities are reporting cancellations and the rhetoric surrounding the use of masks has divided an already divided community.

Reinette could have worded her objections to the mask mandate any number of ways that wouldn’t have triggered the latest media feeding frenzy, but that would require learning from past mistakes, something the mayor has never been able to grasp.

The outgoing city council will hold a special session to deal with the issue on Tuesday. Look for pre-Fourth of July fireworks.

9 Responses to Here We Goat Again