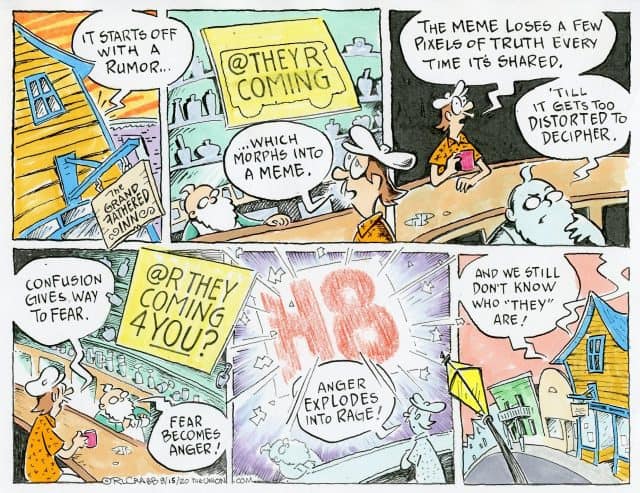 Some people around here don’t think the locals are up to protesting on their own. There must be outsiders pulling the strings, right?

And if there are some of those urban agitators in the crowd, so what? Marching down the street and banging on pots and pans is hardly a capital offense, and is covered by the 1st amendment. After watching Eric Christen and Reinette Senum encouraging the crowd at the Capitol to come to their protest at the Rood Center, it only seems fair to invite the opposition.

If anything, the thugs that took to the street to defend mom and apple pie only made the noisy protesters more sympathetic. The local BLM was beginning to wear out their welcome with their never ending marches and street blockages. Now the viral photo of a black woman being manhandled has gone viral, along with the mug shot of the grinning idiot who allegedly did the mauling.

I’ve asked several times if anyone in Grass Valley or Nevada City has been told to relinquish their property or pay tribute to BLM, and I’m still waiting for a response. The main thrust of the local protests appear to be aimed at keeping the issue of racism in the spotlight and demand police reform.  Other than some lipstick on the window of the Old Town restaurant, I haven’t seen any scenes reminiscent of Portland or Seattle, despite what Ted Cruz says.

And I see George Rebane has taken me to task for my piece on the Country Pie debacle of 1970. George seems to remember a different political climate in those days. I suppose I could just as easily rewrite the story of his past fleeing across Europe during WWII, being chased by Germans and Russians while being strafed by the allies. In the new version, we’ll say the Nazis weren’t all that bad, because, hey, at least they weren’t the gadamn antifa commies.

And because George wasn’t anywhere near Nevada City in 1970, he wouldn’t know about Melissa, who with her biracial child was gifted with a brick through the window of her Nevada City apartment. He wouldn’t have known about hippie Bob getting his beard ripped out by the roots. There were plenty of other examples.

George doesn’t believe the hippies of yesteryear are anything like the current crop of Black Lives Matter protesters, mainly due to the current neo-marxist rhetoric. It’s hard to believe George lived in the sixties. The entire back to the land movement was centered on communal living. Ho Chi Minh and Che Guevara were more popular than Nixon, and Martin Luther King was the godfather of social justice.

I’ve known George for the better part of a decade. We broke bread together several times, at his home and mine, and discussed politics in a civil manner. We agree on a variety of issues. I am steadfastly against the overreach of the woke cancel culture that has been germinating on college campuses for a good twenty years. I’d like to see the details before we start defunding police. Although I understand the aversion black people have for confederate statues, I believe the good done by Washington and the other founding fathers gives them a second chance at redemption. While I support the concept of black lives mattering, I won’t be sending a check to the home office.

I trust the Democrats as far as I can throw them. I am especially hostile to Assemblywoman Lorena Gonzalez for her ill-conceived AB5, and I’m angered by the Governor dedicating $20M to enforcing it while we are in the middle of a crushing recession where every job counts.

But it irks old George and his cronies that for years I’ve sought a middle ground to try to salvage what’s left of our democratic republic. According to the right, I’m a dupe of the collectivists because I like Medicare and the post office. How can you reason with people would rather see families die in the streets than get medical care and strangle the post office to win an election?

My democratic socialist friends give me grief when I suggest that government can’t fix all the ills of the world, and their need to regulate every aspect of our lives is as wrong-headed as doing away with all regulations.  It turns out I’m either too liberal or too conservative to be part of any current political party.

And on most days it looks like my critics will win the day, because we’ve come to a place where both sides have convinced themselves that only by winning it all can the country survive. No mention of what to do with the 60 million losers who vote the wrong way.

And frankly, I don’t see how there is much of a future for anyone if we can’t get along any better than this. If anyone thinks this will be settled in November, I’ve got a bridge that’s on fire and sinking in a swamp I’d like to sell you.

3 Responses to “THEY R COMING!”