Whose Town Is It, Anyway?

It was a lazy summer afternoon in 1970 Nevada City. The little section of Pine Street between Broad and Commercial Streets had been closed off for Country Pie, a crafts fair sponsored by Gary and Alan Rogers.

Local artisans were going on about their business, hawking pottery, candles and other handmade wares, while being observed by a group of locals who had gathered in front of Eddie’s Broiler across Broad Street. There was much grumbling among the mostly unemployed or retired loggers and miners about the hippies who they felt were invading “their” town.

A young fellow with long blond hair and a beard known only as Hippie Bob was crossing Broad Street when he stopped midway to talk to a friend. A truck driven by local logger Jake Graham patiently waited for the two to move along, but after a few minutes he pulled forward and told the hippies to get out of the way.

Hippie Bob responded with a few choice words and a one-finger salute, which infuriated Graham. He parked his vehicle and returned to the scene, where he joined the growing crowd of likeminded locals who had been taunting the artisans at the street fair.

It was a situation that had been building since the Summer of Love in 1967, when young longhaired folks began moving to the area in search of an alternate lifestyle away from the stifling constraints of city life. Land was cheap, and various communes sprung up in the hills, along with illegal marijuana farms.

Not everyone was unhappy with the newcomers. New businesses were filling empty storefronts and paying much needed sales tax. The cash generated from the pot farms bought farming equipment and building materials at the local lumberyards and hardware stores. Wads of dollars may have raised a few eyebrows, but hey, it was still profit and profit is what business is about.

The group on the corner didn’t care about any of that. They were not going to be pushed aside by a bunch of commies from Berkeley, and so they confronted Alan Rogers, who with his brother Gary had helped organize Country Pie. The brothers were also proprietors of the Rogers Frame Shop, which was located on Pine Street at the time.

As Alan remembers it, “They were big guys, loggers and miners, and they demanded an end to the street closure.”

“They didn’t intimidate me. I was young and in pretty good shape, so I met them toe to toe.”

Still, Alan didn’t want to see his friends’ hard work destroyed by a gang of vandals, so it was agreed the fair would close down.

The issue was put on the agenda for the next city council meeting. An overflow crowd of concerned citizens forced the meeting to move to the Elk’s Hall, at that time above Friar Tucks.

Then- city manager Beryl Robinson said he was surprised by the reaction and the vitriol hurled at him for allowing the event to take place on city streets. He recalled having to walk through a gauntlet of angry constituents to get in the building.

Freemont “Jake” Graham unofficially ran the two-hour meeting. The main subject was the townspeople’s complaint that dirty, half-naked people with “ugly armpits” as one woman described them, were allowed to stand and sit on the sidewalks in front of businesses and “driving legitimate customers away. Police Chief Moon and assistant DA Ron MacMillen stated that any local ordinances had been voided by state law.

Councilman Bob Paine, who had also spent his life here said “39 years.” Dr. Leland Lewis yelled “You can’t simply legislate against long hair and clothing.” He answered Graham’s question, “Six years, but what does that have to do with anything?”

Richard Hotchkiss spoke for the craftsmen who organized Country Pie. He said he was a lifelong resident of the county. His wife has been a teacher in the Nevada City school system for six years and “this has been the best place for our child to grow up -until this fiasco.”

After almost two hours of everyone having their say, each councilman made a remark. The council wouldn’t have issued a permit for the two-day show “if we had known what would happen.”

“We did it to bring in business,” Councilman Lon Cooper said, and Arch McPherson echoed his feelings.

Mrs. Elliot remarked that a sign should be placed at the city limits saying “Clean People Only Wanted.” Some wag said it would have to be a historical sign, which brought laughter from the 300 in attendance.

The tension between the old and new residents simmered for the remainder of that summer. There were stories of harassment and a few fistfights in the bars, and some folks from both sides decided that Nevada City wasn’t quite the nice little town they thought it was and chose to move on to greener pastures.

Those newcomers who remained became the business owners and artists who shaped the town  through the next half century, to this place we call home today.

So it is disappointing to see history repeat itself on these same streets. Most, if not all the participants in last Sunday’s melee were not even born when the Country Pie debacle dominated the news in 1970.

Nevada city, Grass Valley and the county surrounding it do not belong to any faction or generation. We have our differences. We always have and always will, but we all breathe the same air. We all drive the same roads. We all shop in the same stores. And we all love our community.

And the next time you are in Nevada City, stop and read the words on the plaque embedded on the front of city hall. 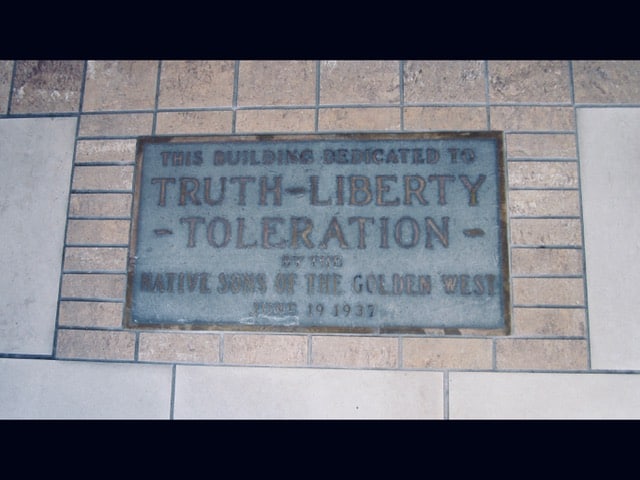 11 Responses to Whose Town Is It, Anyway?