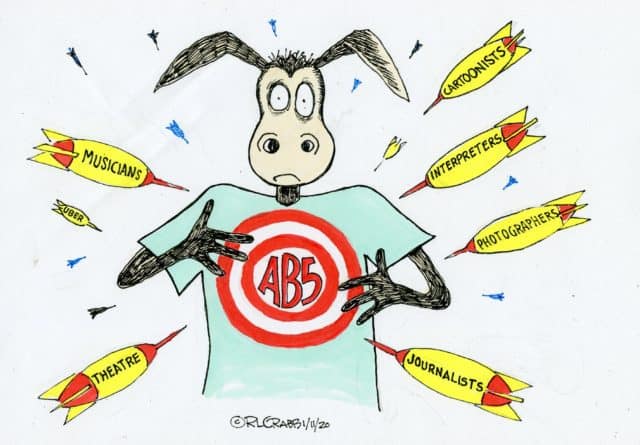 As the new year begins, the impact of Assembly Bill 5 has galvanized those of us who have been affected by the new rules of employment. Dozens of professions and thousands of independent contractors suddenly find ourselves scrambling for a way out that doesn’t involve incorporating into a business because we happen to work a side job ten hours a week.

The opposition to AB5 is huge, but in many cases professionals are trying to carve out exemptions for their jobs and ignoring others. The trucking industry managed to opt out, but freelance writers were told their suit was too little, too late. Other groups are trying to parse the legalese language to their advantage.

To me, it seems like these efforts would do better to kill the entire thing and send the lawmakers back to the drawing board. Picking it apart only serves to show just how unfair AB5 is to everyone.

I also do not agree with those who want to steer clear of partisan politics. This bill is 100% Democrat. It was written by an assemblywoman who curses like a sailor and dismisses us as whiners who are too dense to understand how fortunate we are to have her party looking out for our well being. It passed on a straight party line vote. It was signed by a governor who just dedicated millions of dollars to enforcing it.

California Democrats believe they have little to fear from the riffraff at the bottom tier of workers. We are, after all, musicians, journalists, community theaters, and cartoonists. What are we going to do? Vote for Republicans? Ha ha ha!

But unemployment does strange things to people. When one has to cancel that vacation, or start living on a diet of beans, or turn down the thermostat, they tend to get grouchy and vindictive. They might not vote GOP, but they could just opt out of voting at all. Democrats should remember that the second biggest block of California voters are independents, and even if they lean left, they might not always drink the koolade you’re serving up.

There are still districts in this state that can tip one way or the other by a handful of votes, and March is coming up fast. There’s nothing like the fear of having to go back to the private sector to make a politician sweat.

Who knows? They might even have to become an independent contractor someday.

Like Loading...
This entry was posted in Cartoonist Under Fire, Inept vs. Insane, Politics. Bookmark the permalink.