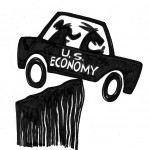 Now that we’ve sat through the most of this year’s election movie, it’s time to gird our loins and get ready for the inevitable ending; the car chase. Our hero, Barack Obama, has destroyed the fortress of the evil right wingers, but the villains still have one more shot at destroying all that’s good and decent in the world by sending the economy into the abyss, in the hope that they can survive to pick up the pieces of a shattered post-apocalyptic nation.

We see the combatants careening down the highway at high speed. Obama’s in the driver’s seat, but Republican henchman John Boehner is doing his best to jerk the wheel away from our hero from the back seat. The camera pans to the highway a few miles ahead, where we see two sacred cows standing in the road. The cow in the right lane is a metaphor for tax cuts. The cow in the left lane represents entitlements. On both sides of the road there is a nothing but air, and a long fall to the bottom of the mountain of debt. The audience is on the edge of their seats, wondering if the two will stop struggling long enough to straddle the center line, injuring both cows but keeping the car from going off the cliff. The President is inclined to smack the tax cow and protect the entitleteat of the cash cow. Of course, Speaker Boehner would go for the opposite target. The camera shifts back to the speeding car, where one minute the two seem to be in agreement, the next minute they are hurling insults.

Both actors have a big stake in surviving this cliffhanger. There’s always the sequel to consider, and the next one will come in 2014. Obama will be around for a few years longer, but if he’s cut up in the crash, his star power will be permanently diminished. Boehner would like to be included in future episodes of the franchise, but he’ll get killed off if the audience is displeased. It’s a long way to December, and there are plenty of plot twists ahead. Stock up on popcorn and enjoy the ride, if you can.

Coming Attractions: I’d like to welcome Jeff Pelline to the comments section. Regular viewers know we have our little disagreements, but the whole idea is to expand the dialogue here. Let’s try to keep the rhetoric and personal jabs to a minimum if Jeff chooses to continue. I promise I will. I’m hoping that Greg and Todd will do the same. If it gets too nasty, you’ll end up on the cutting room floor.