I Scream for the American Dream 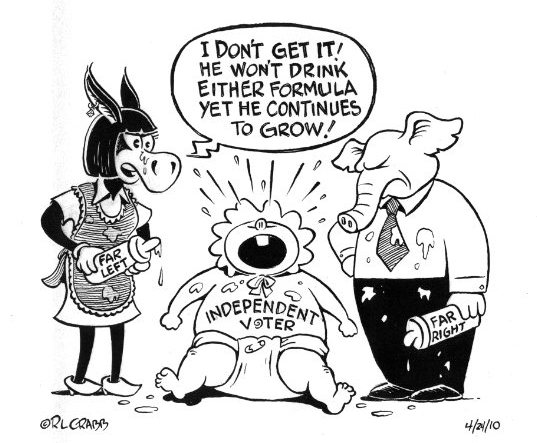 I have no illusions that independent voters will abandon the two party hegemony this fall. Every attempt at creating a viable third party alternative has fallen flat on its collective face. Yet, the above cartoon is still an accurate portrayal of the American electorate. To be sure, there are some voters who feel that the left and right are not radical enough, but I continue to believe that the majority of the disenfranchised are just starved for pragmatic solutions to the overwhelming problems we’ll face in the coming years.

Former Senator Alan Simpson summed it up rather succinctly when asked why the President and Congress have ignored the recommendations he and Erskine Bowles submitted in their comprehensive report; neither party will accept compromise. It’s not in their DNA anymore. Republicans cower in the shadow of Grover Norquist while Democrats continue to make promises of giveaways they can never hope to keep.

No, the only thing that will turn the tide against the two party system will be failure on a scale so massive that they will be lucky if voters don’t put a bounty on their scalps. The way things are going in this crazy dysfunctional world, that day may arrive sooner than later.

42 Responses to I Scream for the American Dream