Much Ado About Nuttin’ 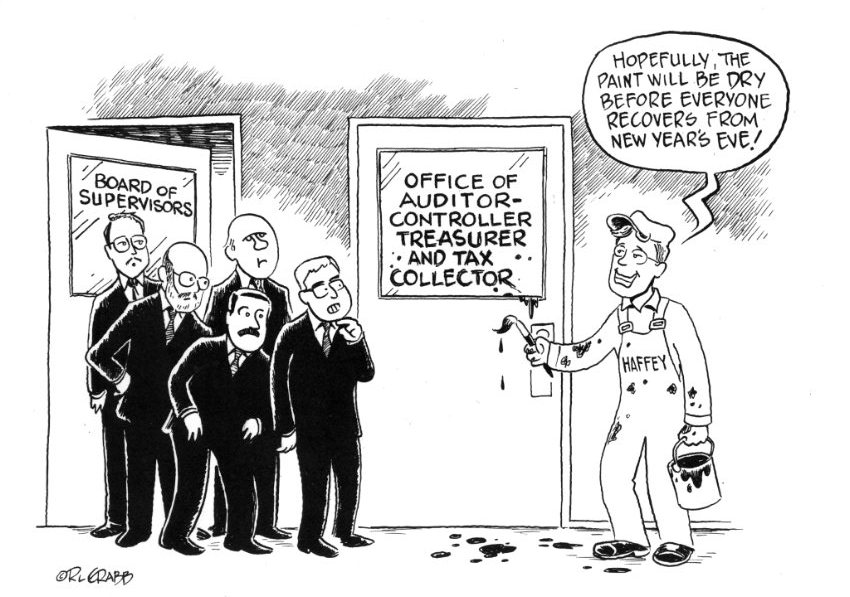 Due to my duties as a caregiver, it’s been a few years since I’ve been able to attend the Tuesday Board of Supes meetings. That all ended a few weeks ago with the passing of my mother-in-law, so I took the opportunity to head up to the Rood Building this morning to see what was up with the proposed special election to facilitate the shotgun wedding of the Clerk/Recorder’s office to the County Assessor’s office and the Treasurer/Tax Collector’s office to the County Auditor’s office. The scuttlebutt around town was that we were looking at another knock-down, drug-out campaign if the Supes okayed the plan. Obviously, as a political cartoonist, it would be prime pickin’s for this week’s editorial page.

It also gave me a chance to reacquaint myself with the usual gang of politicians and activists who frequent these gatherings, and I was not disappointed. They are all good folks, no matter which side of the aisle they sit on, and most have never given me much flak for my crude renderings of them and their causes in the newspaper. Even Jeff Ackerman showed up to say goodbye to the assembled throng.

I never imagined that the first thing Rick Haffey would use in his presentation would be my old cartoon of him trying to consolidate the Clerk/Auditor offices while we were all sleeping off our holiday hangovers, but there it was, projected onto the wall in all its IMAX hugeness. Too bad it wasn’t in 3D.

But back to the issue at hand…After Rick’s introduction, Board chair Ted Owens stopped the proceeding and went directly to input from the board members and the public. It was generally agreed that this was a waste of time, and the proposal was unceremoniously dumped into the shredder of history. Who says government can’t do things in a timely manner?

It’s good to be back. I look forward to seeing a lot of familiar faces, and some new ones, between now and November.