Inept vs. Insane: Reading The Entrails 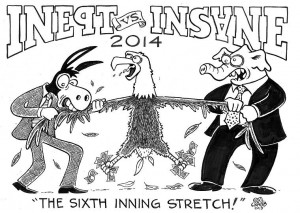 Tuesday’s election has been seen as the opening salvo in the upcoming 2014  slugfest. There were no huge surprises, but political witchdoctors on both sides are already sifting through the cadavers to see where the future lies.

Vilified In Virginia: As expected, Democrat Terry McAuliffe sailed to victory in the Governor’s race, although he only managed to beat Tea Party darling Ken Cuccinelli by a few percentage points instead of the blowout the Dems were predicting only days ago. The race was complicated by the candidacy of Libertarian Robert Sarvis, who managed to garner 6+% of the vote. Sarvis was obviously a ringer for the Donkey Party, championing taxes and other libertarian no-nos, and received wads of cash from liberal PACs. (Payback for Ralph Nader in 2000.) Still, there were enough Republicans who couldn’t stomach Cuccinelli’s hard right social agenda, or the fact that his nomination was engineered through a rigged convention rather than a primary. Conclusion: Cuccinelli’s narrow defeat will not discourage the Tea Party from choosing candidates from the outer limits. We control the horizontal. We control the vertigo.

The Jersey Devil Wears Prada : Governor Chris Christie sailed to victory as expected, tallying 60% of the vote in the heavily Democratic stronghold. Dem candidate Babs Buono lashed out at her own party for giving her nothing but a pair of cement pumps and booting her off the pier in Atlantic City. Barack Obama was nowhere to be found in the Garden State, except for the damning photo of him embracing Christie after Hurricane Sandy.

Colorado C-Section: Eleven counties in the hinterlands of the mountain state went to the polls to consider amputating themselves from Denver, and came up aborted. Moffat County, already separated from the rest of the rebel counties, declined to switch states and become “Baja Wyoming”. (You can’t make this stuff up!) Voters in the rest of the state voted to tax their newly-legalized Cannabis. (15% excise tax, 10% sales tax.) Funds will be used to construct the new Hunter S. Thompson Elementary School.

On The Campaign Entrail: Politicians and Pundits are already gobbling the guts of the election like ravenous zombies. There are many factors that have yet to play out. President Obama has seen his approval ratings sink to new lows with the sputtering Obamacare computer meltdown. His biggest problem is the video loop that now plays endlessly on cable TV. If you like your insurance, you can keep it, period. If you like your doctors, you can keep them, period.  I’ll bet he feels like he’s having a period right now. Up to fifteen million voters have been told they should be thankful that their new insurance is more expensive. If they are still stewing over their surgically lightened wallets a year from now, many may hold their noses and drink the bitter tea. Stay tuned…

18 Responses to Inept vs. Insane: Reading The Entrails