State Of The (Groan) Union 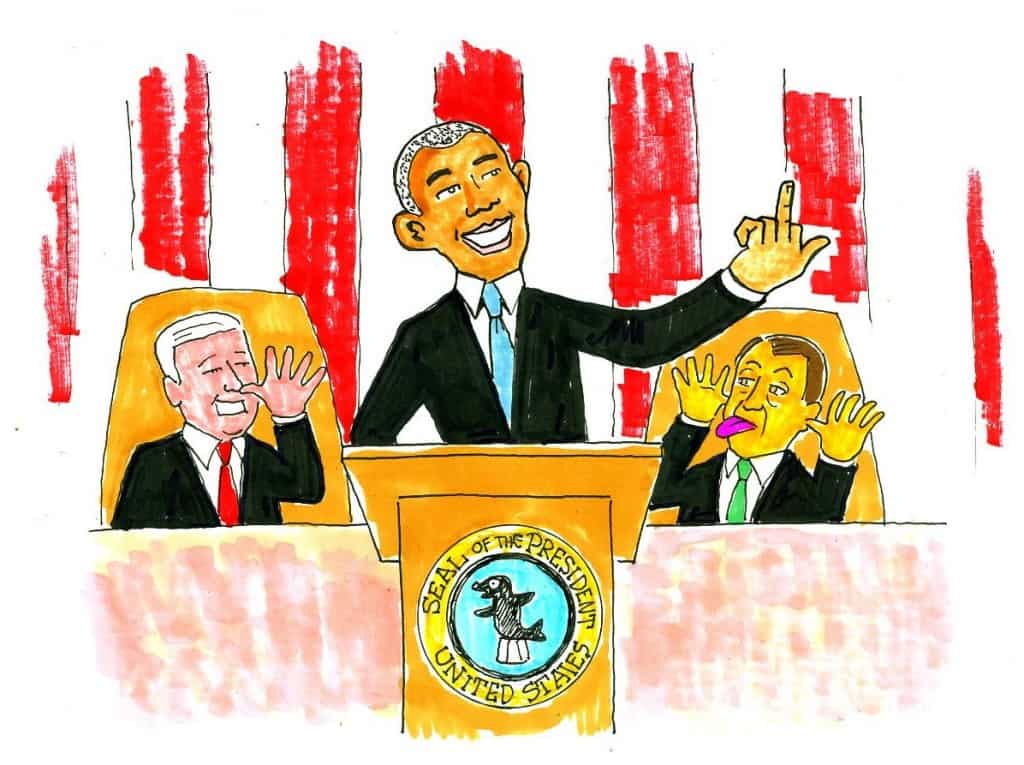 This week’s State of the Union dispelled any lingering doubt that the two dominant political parties truly hate each others guts . With Obama reeling off executive orders on immigration and Cuba, and the promised veto of the Keystone pipeline, any pretense of presidential submission in the coming congressional session was unceremoniously dumped onto the dungheap of history. The newly-seated Republican House and Senate wasted no time in making it clear that they will dive headfirst into the rabbit hole of psycho-wingnut legislation even though their first attempt, a bill restricting abortion, was itself aborted in a whirlwind of confusion and last-minute backsliding.

And the dust had barely settled on the midterm election before the campaign to replace Barack Obama had begun. Jeb Bush, hoping to go three for three on a Pennsylvania Avenue occupation, started to shed the potentially conflicting financial monkeys on his back and testing the temperature of the rich donor pool. Then suddenly, without warning, Zombie Romney arose from the dead, staggering from the elephant’s graveyard chanting “Come-back! Come-back!” There was much chattering among the also-running second tier wannabes, including Ted Cruz, Rand Paul, Marco Rubio, and (!) Carly Fiorina?

It’s somewhat quieter on the Democratic side, with the smart money still betting on Hillary Clinton. To the left of the left, there are those that dream of Elizabeth Warren or Bernie Saunders denying Her Hillaryness another chance at the golden ring and fufilling the progressive dream of a socialist utopian society, but it seems unlikely at this early date. (Of course, we thought she was a shoo-in in ’08 as well.) All hope of retaining the top job for the Dems depends on Obama now. If he can keep the economy from sliding into the ditch and avoid bumbling us into another war, they may buck the electoral odds and stay in power.

And they’ll no doubt have plenty of help from the neanderthals in Congress. Right off the bat we have rising star Iowa Senator Joni Ernst 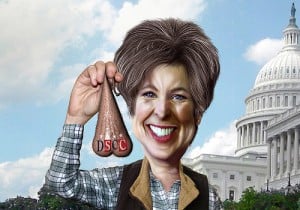 calling for self reliance in the official party rebuttal, despite her family’s pork barrel farm subsidies in the neighborhood of $463,000 from ’95 to ’09. That’s a lot of pig nuts, although it doesn’t hold a candle to our own congressdude Doug LaMalfa’s $5.1 million. We can expect plenty of belt-tightening for food stamp recipients while our Republican friends dine on Iowa oysters on a bed of California rice. Joni was followed by no less than four additional rebuttals from her fellow conservatives, all jockeying for position in the coming GOP presidential beauty contest.

Because that’s where the state of the union is now; in a perpetual campaign cycle. The give and take of legislating has been permanently replaced by partisan grandstanding. Oh, they’ll no doubt work together to keep the whole rotten mess from collapsing on their watch, but tackling real problems will have to wait until one side or the other claims total dominance over all three branches of government. And in a nation as divided as ours, that outcome is about as likely as peace in the Middle East.

Some people (who shall remain nameless) have accused me of being a cynic for pointing out the shortcomings of American politics: too negative, too combative. It’s not like there aren’t good people doing good things to make this a better world. I would agree, and you can find plenty of inspiring stories at the click of a mouse. It would be folly to just give in to despair, but all those good efforts will come to naught unless what passes for leadership changes their partisan stripes. Even a nation as rich and powerful as these United States can’t go on forever rearranging deckchairs while the ship of state slowly sinks into the sea of failed democracies. The “smart people” crow that we are still so far ahead of our closest competitor it will be another fifty years before they catch up. Yeah, well, time flies when you’re having fun.

So I’ll continue to add my voice to those who believe that it’s time to ditch these dinosaurs and find a place that truly fits the middle of America. The fantasy of waiting until one or the other of these extremes goes extinct is not an option. The clock is ticking…

UPDATE: House Speaker John Boehner, in a classic political Pearl Harbor moment, announced the booking of Israeli Top Gun Bibi the Yahoo for a one night stand at the capital, causing the White House to go into convulsions. Expect a counter attack in the weeks to come.

5 Responses to State Of The (Groan) Union