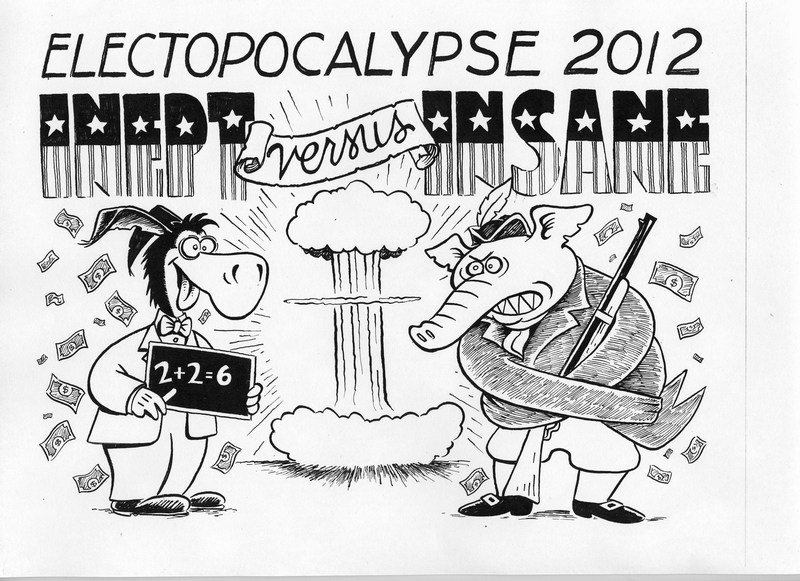 I refuse to join any club that would have me as a member.

That pretty much sums up my view of politics here in 2012. You begin to wonder about the sanity of the nation when our choices have been reduced to Democrats and Republicans. It’s even more bizarre when you consider that many of the people who reject the two party system believe that they aren’t radical enough. There are some on the left who won’t be satisfied until invertebrates have voting rights and some on the right who believe you shouldn’t be able to vote unless you can recite the Federalist Papers backwards.

You can count me among those who “decline to state”, a designation that implies that the person is too embarrassed to admit membership in either club or too confused to make the choice. I reject that notion. Both parties have traits that I admire and embrace, but both have forgotten what individual freedom is all about.

Democrats represent lawyers, unions, environmentalists and minorities. They believe the country needs more democracy and more government. About the only place the don’t want to see big brother is in the bedroom, which is understandable unless you’re into that kind of thing. They want to tell you what to ingest and inhale, where you will live and what you will drive. The number of laws they come up with is exceeded only by the fees, fines and taxes that support them.

Republicans represent money, religion, and the military. They want to strangle government and return to individual responsibilities and rights, unless you’re a pregnant woman or homosexual. For the former, once conception has occurred their bodies become wards of the state. For the latter, it’s back to the closet. For everyone else, you’re on your own. The only kind of socialism they approve of is defense, and they will spend any amount of money to make sure our national saber rattles louder than the rest of the world combined.

Moderation is a rare commodity in today’s politics. Consider that nowadays John F. Kennedy would be reviled as a blue dog by his party and Dick Nixon would be called a RINO and consigned to the cheap seats in the GOP hierarchy. The one thing both sides will agree on is that moderation is for sissies. The only solution is the unconditional surrender of the enemies of the people. (Take your pick.) Governing has been replaced with winning.

At a Tea Party gathering last year, our esteemed congressman, Tom McClintock, told the faithful that the country must go with one side or the other, or sink into chaos. Never mind that the national trend in elections is usually a victory determined by a hand full of votes. The two parties are banking on the idea that if things get bad enough, they can scare us into accepting one radical agenda over the other.

In the weeks and months to come, we will observe this exercise of democracy and try to make sense of it all. Stay tuned…