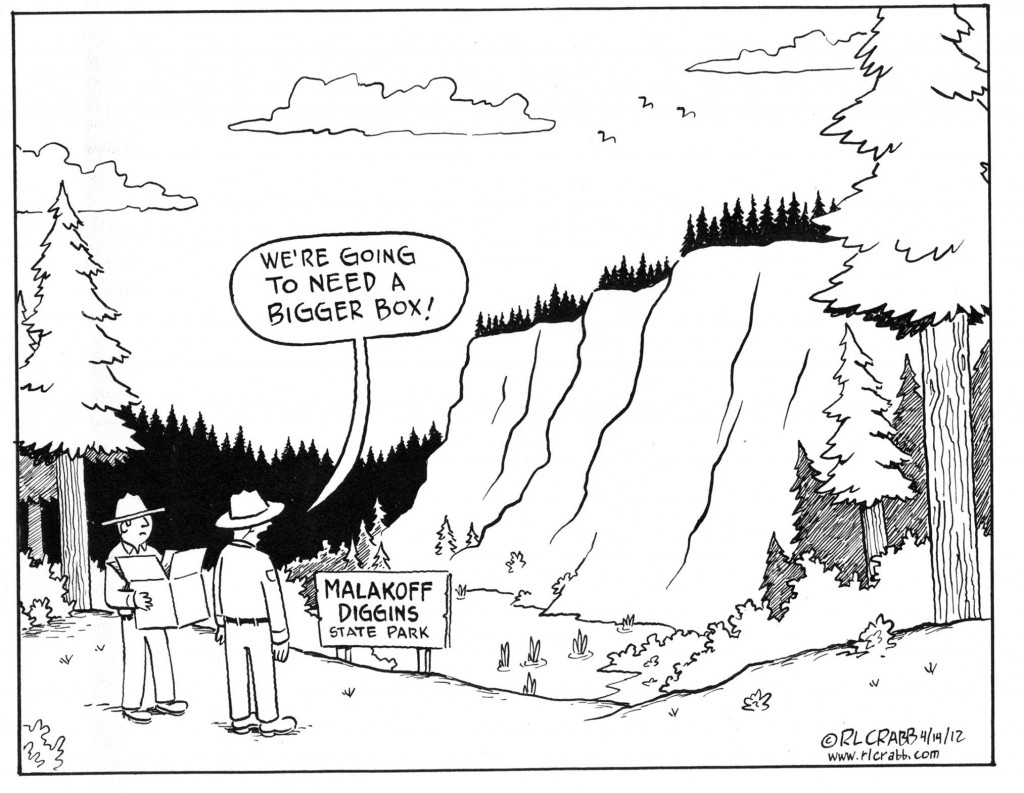 Russ Steele recently reported that it appears the Malakoff Diggins State Park will remain open, at least on a part time basis. One of the reasons stated was that it would be too difficult to store all the artifacts at a new location. Whatever the reason, I’m glad to hear it.

I have many memories of Malakoff. When I graduated from high school in 1969, my first job was as a ranger assistant at the park. I got to wear a uniform, was issued a state key, which opened every lock in the park, and it paid $2.28 an hour, good wages back in those days.

I lived with another assistant in a cabin off the main road in town. We had no electricity, and an outhouse in back. ( I was warned to throw a few rocks at the door in the morning, in case some animal had decided to move in during the night. )

One day, we were called to the office for an emergency. Some visitors were riding their horses down the trail at Humbug Creek when one of them lost its footing on a spot where there was water running over the trail. The spooked horse leaped over some manzanita bushes and landed in a vertical mine shaft, the source of the water. The rider landed under the horse in the water filled hole, but miraculously managed to get his head above water and climb out. The horse was a different story.

The head ranger called the Washington Ridge Conservation Camp, requesting assistance from the ample supply of inmates. A van arrived shortly thereafter full of some of the biggest black guys I’d ever seen. We all headed down the trail and found the rider, wet but unhurt, sitting next to the shaft where his hapless steed flailed wildly in the cold and deep water.

We managed to get a pair of ropes around the horse, and after several attempts, the inmates pulled it far enough up the side to allow it to get some traction. Once out of the hole, the horse was still in shock and uncontrollable, so the owner picked up a log and smacked it across the head. The horse calmed down immediately.

It was quite an afternoon, and one of many I will never forget at Malakoff State Park.