Time Will March On 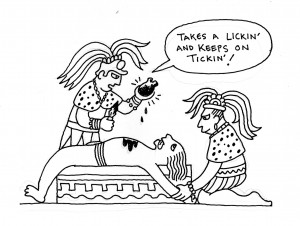 Archaeologists in Guatamala have recently discovered a stunningly preserved mural that lays to rest any notion of the world ending in December, 2012. This new calendar spans about 7000 years, far beyond the supposed doomsday embraced by new agers and other pop culturists. The news was not well received in Washington and Sacramento.

“What the hell?” sputtered an administration official, who spoke under the condition of anonymity. “You mean we’re going to actually have to pay our bills?”

The Democrats have long bought into the fantasy that they could run any kind of deficit in order to win the election this November, with the understanding that they wouldn’t be around to deal with the consequences. “Winning was always our goal,” said the unnamed bureaucrat. “We figured if we could keep the Republicans out of power until the shit hit the fan, we could go out on top.”

The Chinese communists, who are atheists that never bought into the pagan mumbo jumbo, are looking forward to renegotiating the massive loans that have kept America from spiraling into a full-on depression. “We’ll take Hawaii and Alaska and call it even,” said a smiling Ka Ching, Chinese minister of finance, while fumbling with his abicus. “We Chinese tend to look at these matters in terms of centuries.”

Meanwhile, Republicans look forward to trashing the Dems financial outlook in the coming campaign. “We’re not worried about those commies,” said a Romney spokesman. “We’ll just nuke our creditors and let the poker chips fall where they may.”

7 Responses to Time Will March On