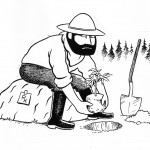 I couldn’t make it to the Rood Center for the Big Debate over the proposed Medical Mary J growing restrictions yesterday, but I managed to catch most of it on NCTV until the screen went blank. (And kudos to Yubanet for taking up the slack.)

Most accounts claimed there were about 300 people attending, and probably more tried but forgot how to get there. The meeting progressed as most do when tackling a hot button issue in Nevada County; some well-reasoned arguments for and against, devolving into applause and occasional boos from the peanut gallery. It appeared to go fairly smooth, although it lasted past supper time. (Hope Nate Beason’s cat didn’t chew his leg off when he got home.)

The Medical Mary J issue has been surrounded by controversy and confusion ever since it was passed back in the nineties. In the tradition of California legislation, our Reps in Sacramento provided no guidelines on how the proposition would work, or how to keep the feds from swooping down from the sky in their black helicopters to gum up the works. As usual, (unless there is money to be made) they relinquisheded the responsibility to the cities and counties to screw up on their own.

High Sheriff Keith Royal did what any self-respecting Republican lawman would do in this situation; make the rules as strict as you can, let the politicians whittle it down, then throw up your hands and tell your loyal base that you did everything you could to protect their interests.

The opponents poured out their concerns over the restrictions on co-ops where patients hand over their scrips to a chosen grower. Many of these people lack the ability to raise their own crops, either because of where they live or due to disability. Of course, there were a few comments from sixties casualties whose disability was obviously caused by their overindulgence in various medicines, legal or not.

The proponents were mostly suburban families who feel besieged by the criminal element we all know exists in this menagerie; career growers who game the system and sell their product in unenlightened states for fun and profit. You can’t help but feel for residents whose new neighbors throw up cyclone fences with razor wire and own packs of pitbulls.

Unable to calm the fears of either faction, the Supes punted until May, when hopefully there will be a compromise ordinance presented. Otherwise, the army of drooling lawyers will file numerous suits to protect the oppressed masses from their heartless elected representatives.

The other option is to let the voters decide. This is risky at best for the pro pot camp. It should be remembered that the last time Nevada County voted on legalization, it lost 55% to 45%. Bummer, man!