I was pleasantly surprised when I saw this morning’s (10/15/12) Google picture honoring cartoonist Winsor McKay. It was also very appropriate in relation to this post. Mary Ann and I just returned from the bay area and the Alternative Press Expo (APE) at the Concourse in San Francisco. Every now and then I am compelled to mingle with other ink slingers and renew my old acquaintances and friendships as well as seeing what the new kids are doing.

Upon our arrival we ran into Mad magazine’s Sergio Aragones, sitting at a table signing autographs and sketches for his legion of fans of every generation. Sergio is responsible for those little margin drawings that have graced every page of every issue since I was in knickers. He is known as the fastest pen in the biz, and he hasn’t lost a second in his forty-plus years of scribbling, although like many of us, he suffers from back problems from decades of sitting at a drawing board. I can relate.

Then we ran into Trina Robbins, one of the founding mothers of the undergrounds. Trina was immortalized by Joni Mitchell long ago in her song, Ladies of the Canyon, with the opening lyric “Trina wears her wampum beads, she fills her drawing book with line.” These days, Trina has traded her drawing book for the computer keyboard and has authored many volumes of historical books on women in comics and other female-related themes. She even shows up in Grass Valley on occasion, the last time promoting her book The Golden Age of Chinese Nightclubs at Tomes. She is a dear friend and was very helpful to me when I was starting out in the biz thirty-odd years ago.

I finally ran down my old roomie, J.R. Williams, at his table hawking caricatures of the famous and not-so-famous and compilations of obscure rock’n’roll music.J.R. and I shared a house in Seattle with fellow cartoonist Pat Moriarity back in the wild and wooley days of the alternative comix renaisance that coincided with the Grunge music scene back in the early nineties. While we were recalling the fun times, we were joined by cartoonist Dan Clowes. You may not be familiar with Dan’s comix, but you may have seen the two movies that were adapted from them; Ghost World and Art School Confidential. He also made a guest appearance on an episode of The Simpsons. We had a great time talking about how much easier it was to be published back in those days.

It’s not so easy now in the 21st Century. Most of the publishers I talked to were still suffering from the recession and the slow grinding demise of print media. You wouldn’t know it to look around the room though. The building was crammed full of the new generation of cartoonists who self-publish their creations. Just don’t quit your day job.

We also met up with my ex, Kika (formerly Kate) Kane at the con. After a full day of schlepping books and artwork around the room, my legs were giving out so we skipped the after-con party and checked into our hotel, where we had to haul our baggage up two flights of stairs.

In the morning, we decided to skip the festivities and get out of SF before the neighborhood was deluged with Giants fans. (The concourse is only a few blocks away from AT&T Park.) Kika had invited us to visit her in Marin, so we made our way across the fog-shrouded Golden Gate to sunny yuppieland.

I have a lot of memories of Marin, having spent much time there in the seventies and eighties. George Lucas was just establishing Skywalker Ranch after making millions off of Star Wars. These days, George has had more problems with the strict zoning imposed on development out that way. Earlier this year he was denied permission to build a new facility in rural Marin, when uptight residents complained about traffic and the threat of degradation of the rural quality of life. (Sound familiar, Nevada County?) After being whipped by the locals, George said, okay, we’ll build affordable housing instead, which really messed with their minds. Liberal Marinites are always portraying themselves as the champions of the underclass, unless it’s in their backyard.

After driving down Sir Frank Drake into Fairfax, Kika met us at the gate to the compound where she lives. We were amazed when we drove into the place, which was once known as the Marin Town and Country Club. Today it is a conglomeration of ramshackle cabins and decaying bars and restaurants, and it serves as Fairfax’s version of affordable housing. (Affordable is a relative term. None of the folks who live there are poor by most standards, unless you consider the astronomical rents in Marin.)

Kika treated us to an excellent lunch downtown, and then we did a tour of the club grounds. It must have been something in its heyday. (And a word to the curious: Don’t wander in there if you happen to be in the neighborhood. The residents are very protective of their privacy.) 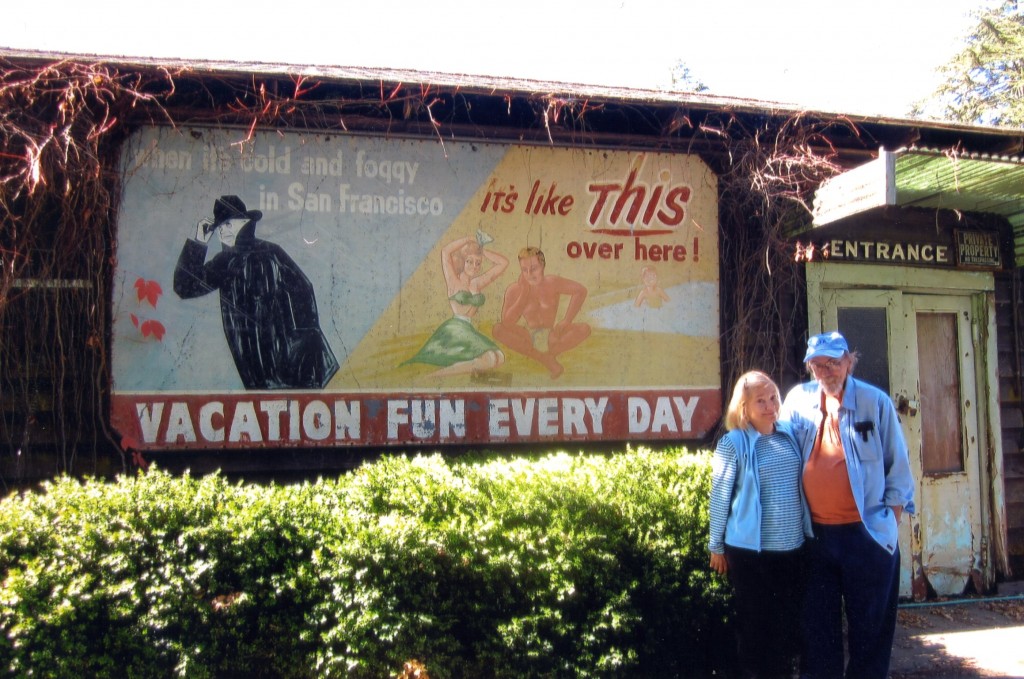 22 Responses to Comix And Country Clubs