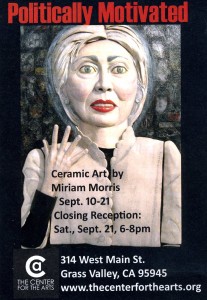 Back in those heady days of the nineteen nineties, I joined up with a group called The Artist’s Guild. We had a gallery above the Nevada City Chamber of Commerce. If you were able to ascend the intimidating staircase, you could view some of the art that was rarely seen in most commercial venues around town. Indeed, it was one of the so-called “outsider art” shows that so impressed photographer and actor Leonard Nimoy that he became a member himself to help promote our struggling organization. Even so, we were continually short of funds and eventually had to close up shop.

It was a worthwhile effort, and if nothing else it introduced me to the irreverent artistry of Miriam Morris. Miriam’s ceramic oddities displayed her wicked sense of humor, which usually lampooned political figures in distorted and compromising positions. Her works have been featured in galleries near and far, including the late lamented “Feats of Clay” in Lincoln.

You can see her latest creations at the Center For The Arts in Grass Valley until September 21st. Check it out.