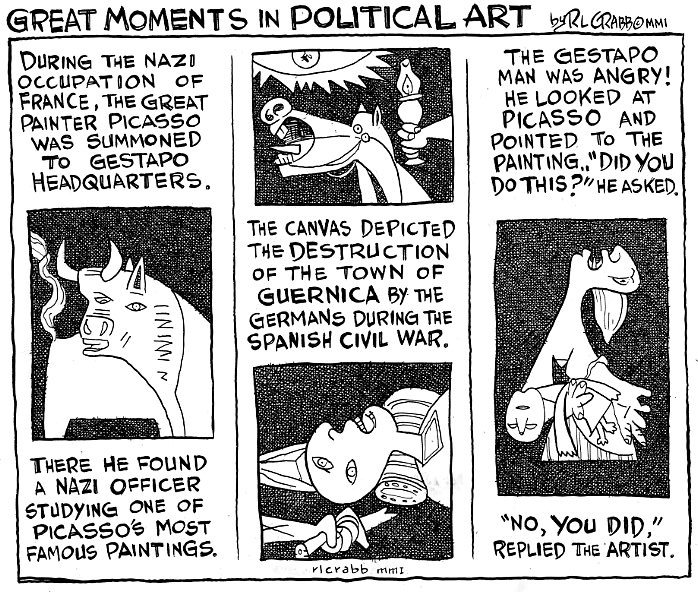 Back in September, 2001, I published this cartoon in The Union. It had been lying around my studio for several months, because at the time it didn’t seem to fit anything that was currently happening in the world. Three days after it ran the planes crashed into the twin towers, the pentagon and a field in Pennsylvania. It kind of freaked me out, like some kind of prescient warning of what was to come. A few years later, I was having dinner with Utah Phillips at the annual Marching Presidents dinner and told him about it. He laughed and said, “Don’t put that kind of guilt on yourself.”

Of course, he was right. It was just a coincidence. But its timeless message comes back to haunt us on occasion. Recall that Colin Powell had the same painting covered at the UN when he called for the invasion of Iraq just a few years later.

And now we find ourselves debating whether to bomb another nation. The message still strikes true, although it can be argued that the Assad regime is the party that “did it”. And our partner in “peace” is a homophobic thug who condones suppressing the free expression of his country’s journalists and artists, not to mention the arms he sends to Syria to kill their people by more acceptable methods.

It really is a case of whodunit, and in the end it may be more of who did nothing to prevent it.