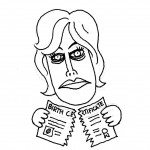 In an earlier post, I stated that reigning birther queen Orly Taitz was not running for the U.S. Senate seat currently occupied by the decrepit Dianne Feinstein. Well, Orly had second thoughts it seems, and did indeed toss her tin foil hat into the ring.

This is an opportunity for California Republicans to really show their core beliefs. Forget about the other losers in the GOP primary, Orly is already a nationally known celebrity who will bring a certain amount of pizzazz to a contest that would otherwise be a snoozer. It’s pretty much a given that Princess Di will be reelected unless she dies of old age between now and November. Orly will give us the media attention we Californians deserve.

Everybody who’s seen ‘The Omen’ (and sequels II, III, and IV) knows how the imposter Obama got elected. Back in 1960, Beelzebub (and co-conspirators Mao, Ayatollah Khomeni, Nikita Krushchev and Hollywood) hatched the infant Obama from the womb of a Kenyan jackal, had him adopted by a lefty loony American girl and her Kenyan hubby, and then moved to Honolulu where some demons in the records department put together a flawed birth certificate to make him eligible to be the top seed in 2008. They were aided by Lee Harper (childhood neighbor and buddy of Truman Capote, commie homo) who wrote a tear-jerker Pulitzer prize-winning novel which was made into a movie starring Gregory Peck. The role cemented Peck’s image as an American icon. Peck then went on to play the father of “Damian” in The Omen. Coincidence? Only a fool couldn’t make the obvious connection.

Now I would be less than honest if I didn’t admit that Orly’s candidacy would be a boon to myself and my commie cartoonist co-conspirators. No more worrying about what to draw for next week’s edition of the lamestream media. With the demise of so many newspapers, we’d be able to cash in on t-shirts and posters and be able to feed our families, at least until November.

So vote your conscience. Do it for America. Make my day.

13 Responses to Orly for Senate