A Different Kind Of Christmas Card 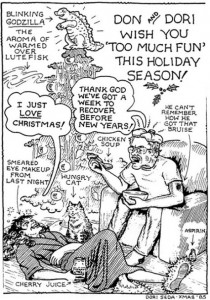 While going through my old Christmas cards I came upon this classic from my old friends, Don Donahue and Dori Seda. It’s especially memorable because of that glowing Godzilla on top of the tree. I remember seeing it at their loft in Berkeley and being envious. (Yeah, I’m kinda weird, but you knew that.)

Don was the original publisher of Zap Comix in the sixties, the series that catapulted R. Crumb to superstar status and inspired numerous court battles over the definition of obscenity. Dori was the book keeper at Last Gasp Comix, the company that later published her one and only comic book, Lonely Nights.

Dori’s career was short, but memorable. She was a regular contributor to R. Crumb’s comic anthology, Weirdo, and appeared in Les Blank’s film, Gap-toothed Women. She also did the movie’s poster.

Along with my ex-wife Kate, we partied our way through many a convention up and down the state. They visited us in Nevada City several times, and once we rendezvoused with them at the Crumb’s house in Winters. Yeah, we overindulged, but it was the eighties and we were young and cocky.

The lifestyle caught up with Dori in 1988. It wasn’t so much the drugs and alcohol as it was her smoking habit. She always carried a carton (yes, a carton) of cigs in her handbag, and claimed she had contracted silicosis from working with ceramics. Although the autopsy claimed otherwise, she always had a nasty cough. She collapsed and died in Don’s arms.

We didn’t see as much of Don after that. Kate and I parted ways and a few years later and Mary Ann and I got together. Don was fascinated with Mary Ann’s doll house, which she had spent a lifetime furnishing with tiny furniture, appliances and knick knacks. One day, Don showed up at our Bourbon Hill home with a gift for the doll house; a miniature human head in a box.

Why? Well, a few years earlier, the police were chasing a criminal across the rooftop of Don’s building and, looking through a skylight, saw a marijuana plant growing in his apartment loft. Being that this was in a more unenlightened era, Don was raided and during the search, a real human head was discovered in a box on a shelf. Don explained that he was not a Hannibal Lector wannabe, but rather a collector of morbid oddities. He had traded a stuffed eight-legged pig for the head, which had come from a university laboratory. The authorities were not amused, but it was Berkeley, so he got off with a relatively light slap on the wrist.

It was the last time we saw Don, and in 2010 he fell ill and passed away. All that is left are Dori’s comic book, Don’s miniature head, and the Christmas card. As you can see, they are merely bookmarks in a larger story.

7 Responses to A Different Kind Of Christmas Card