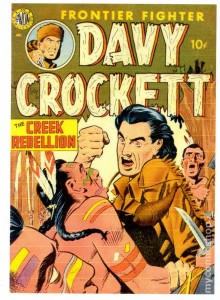 As we head into the fall election, candidates search for a winning strategy to attract voters. Some will rely on straight party line politics, either Republican or Democrat, and hope that the independents will ultimately vote for the lesser of two evils. Those who eschew such labels will attempt to walk the fence and avoid falling into a partisan position.

Back in the early days of the Republic, issues were important, but not as important as a friendly, down home demeanor and perhaps a little bribery. The following passage is taken from The Autobiography of Davy Crockett. He was running for reelection to the Tennessee Legislature, and debating a Doctor Butler, who was running against him…

I told him that when I set out electioneering, I would go prepared to put every man on as good a footing when I left him as how I found him. I would therefore have me a large buckskin hunting-shirt made with a couple of pockets holding about a peck each and that in one I would carry a great twist of tobacco and in the other my bottle of liquor, for I knowed that when I offered him a dram, he would throw out his quid of tobacco to take one and after he had taken his horn, I would go out with my twist and give him another chaw. And in this way he would not be worse off than when I found him and I would be sure to leave him in a first-rate humour.

Eventually, two other candidates joined the race, but Crockett carried the day by two hundred and forty-seven votes. If he were running today, he might substitute the tobacco for some fine Northern California bud. It would be sure to leave the voter in a first-rate humor.