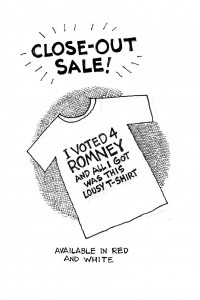 Well, it’s all over. The storm surge of Sandy is mingled with tears of joy in the Great Northeast, and the red blood of defeat from the injured Heartland. (One cartoon I saw featured a mid-westerner lamenting, “Now that the election is over we’ll go from being the Heartland back to the ‘fly-over states.'”) Republicans will lick their wounds and take comfort in the fact that they still managed to hang on to the House of Reprehensibles. Democrats will spend a few weeks thumping their chests and then get back to the job of trying to run a country that is as divided as it was twelve months ago. The election, as it turns out, was much ado about nothing.

There were a few highlights for those of us who ridicule the rich and powerful. Donald Trump called for revolution, a million billionaire march on Washington, until he realized that most of them were quietly shuffling their assets to tax shelters in foreign lands and unavailable for comment. You’re fired, Donnie.

Chris Matthews, punch drunk and reveling in Obama’s victory, thanked the Storm Gods for taking a bite out of the Big Apple and convincing the fence-sitters that only Obama could lead the earth into a climate-friendly future. As soon as the words passed his trembling lips, he realized that he was still on camera and not in the airport lounge. Millions of homeless refugees would see his stupidity played over and over on the community TV at the shelter. He walked it back, and this time thanked the Media Gods that he’s a liberal. A conservative would have been drawn and quartered and distributed to every burough in the city. Matthews will survive to blather another day.

Karl Rove experienced a meltdown over at Fox when network number-crunchers projected Obama as the winner in Ohio. Surrounded by crystal balls, calculators and a Ouija board, he refused to believe that his numbers were skewed and went into the fetal position as Megyn Kelly looked on in horror. During the break, doctors injected stimulants into his jugular vein and reinflated his massive head with a bicycle pump.

Obama won, and his first act will no doubt be to start smoking again. The ball’s in his court now, and his legacy is on the line, not to mention the future for us peons out here in the real world. All he has to do is navigate the hostiles in the House, the filibusters in the Senate, the base that expects him to bypass them and rule by decree, the fizzling world economy and a Mideast that’s burning a slow fuse to World War III. Krugman and Reich will demand massive infusions of cash to plug the leaking dyke, but such remedies come at a price. The world runs on capitalism, no matter what anyone says, and at some point those lenders will need to call in the loans to keep themselves afloat.

The Republicans may or may not realize they need some new blood in the party. Old habits die hard, but without a larger base the party will wither further as time passes them by. Look for a “Draft Rubio” movement in the coming years.

My choice for Chief Exec, Libertarian Gary Johnson, managed to pull in a little over a million votes, giving him a solid 1% slice of the big pie. I think he might have done better if he had been more aggressive, but that’d not the Libertarian way. Too bad.

The big winner of Electopocalypse 2012 was Big Bird. She can rest easy in the nest of Public Broadcasting, knowing that her eggs are safe from the Big Bad Fox for a few more years. There will be no time limit on when you can make them into omelletes, and no vaginal probes. If Romney had won, I’d be drawing her as the Thanksgiving turkey.