Inept Vs. Insane: Are We There Yet? 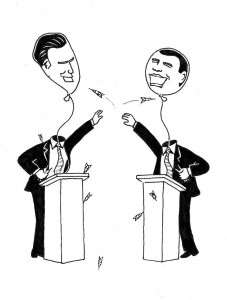 These are times of plenty for political satirists. The air is filled with gaffes, zingers, distortions and outright lies ready to be plucked from the ether and reassembled into witticisms for the suffering masses, who need something to laugh about. Sometimes, the laughter is involuntary, burped up as people try to digest the tripe that’s being fed to us.

The polls are swinging widely from left to right to left with both sides prematurely touting the numbers that favor their candidates, proving that no one has a clue where this election will end up. In their panic, campaigns and their allies in the press are grasping at any misplaced word or phrase and running it into the ground. Fox and MSNBC are trying to top each other as the most pandering, sorry excuse for journalism ever to spit at you from the TV screen. One right wing dingbat blog (not local) suggested that CNN’s Candy Crowley was too fat and ugly to moderate the debate, and ran pictures of the blond bombshells of Fox for comparison.

And why not? If you think Mitt Romney was distracted by Candy’s interruptions, just think how Obama will react when Megyn Kelly does a Sharon Stone shot in the middle of a discussion about reproductive rights. Ever notice how the female Foxes tend to sit on high stools in short dresses rather than behind a desk like most news shows? Am I sexist for noticing?

Not so over at MSNBC. From noon until they are replaced by cops and robbers reruns, the programming is non-stop Republican bashing. Any hint of objectivity is roundly rejected, and most of the women wear pants. Last night I watched Lawrence O’Donnell smack down one of the Romney boys for joking about giving the president a knuckle sandwich for dissing his dad. Oh! The outrage! A few years ago he did the same number on one of my colleagues for satirizing Michelle Obama’s healthy foods campaign. Free speech? Only if you’re on my side. O’Donnell is an embarrassment, although I think he would be a natural for the role of the bad guy in the next James Bond flick.

The candidates have been very obliging, be it Obama’s stumbling on foreign policy, Romney’s lady binder, Ryan’s dishwashing episode, or Chuckling Joe Biden. You have to cut them a little slack, though. They’ve been on the road non-stop for months, and trying to remember which city you’re in is as difficult as where you stand on energy policy. You can bet they’ve been hitting the Red Bull heavily, except for Romney who drinks only distilled water from the Sacred Salt Lake.

With all of these gems to work with, you’d think I’d be happier than a pig in…well, you know. Unfortunately, the closer I look at the race, the more I realize how much trouble we’re in. One of these guys will actually win.

48 Responses to Inept Vs. Insane: Are We There Yet?