Rights of the Living Dead 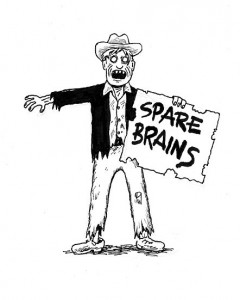 Zombies are big business these days. I’ll bet George Romero never dreamed that his 1968 chump change budget movie Night of the Living Dead would literally spawn an entire industry devoted to the undead.

The Center for Disease Control tells you what you need to survive the coming zombie attack. They say it’s a joke. Right. Where the hell is Darrell Issa when you need an investigation? Maybe he’s in on it. I can see how he could profit from it… The Club, it’s not just for your car anymore…. We’ll need all the blunt objects we can find for smashing zombie noggin. (If that’s too much work, a .45 will do.) Is it any wonder why everyone is stocking up on ammo, aluminum baseball bats and freeze-dried Big Macs?

A common theme in the movies is the returning undead relative. When grampa shows up at your door and he’s hungry, do you have the right to lock him out or ventilate his cranium? Not if the pro-unlife nanny government has anything to say about it. Just google up “zombie rights” and you’ll see where this is heading. Pretty soon, you’ll have to show a death certificate to vote, and of course the undeceased will be wanting their back pay from social security and medicare benefits. The living, as usual, will get screwed.

But there is one consolation. Eventually, the zombies will rot away to nothing. Then we’ll need to do something about the flies.

8 Responses to Rights of the Living Dead